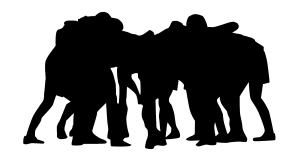 Youth Sports has been a staple en la vida de mi familia for almost 10 years. And with each season, I have gained a deeper appreciation and fondness for sports. Deportes.

My son’s participation in a recent basketball tournament was the highlight of our weekend and has been the topic of conversation en mi casa for the past few weeks.

Many of the details of Friday and Saturday’s game are overshadowed by the sweltering heat that took over the gym. Muy caliente.  I can, however, replay every second of Sunday’s game over and over in my mind.

El sábado. From the time the two teams stepped on the floor for Saturday’s game, I knew it would be a upward hill battle.  We were outmatched by the height of our starting opponents. Muy alto. The body language of our starting five and the bench was a clear indication that they were a bit concerned. Preocupado.  To make a long story short, it was hot and we got stomped by over 20 points.  Muy mal.

El domingo.  On Sunday, we faced the same team. When the same starting five of the other team took the floor, it was almost like an instant replay, casi, except that our team looked different this time. Diferente. Their body language had changed. They weren’t slouching as they walked onto the court, their heads were up and the guys on the bench were leaning forward, elbows on their knees waiting in anticipation for the jump off. Listo.

Our parents and fans rallied the entire game, some of us even stood for all of the second half.  I would like to believe that it was the side-line-dancing antics of one the fans and our unyielding chants of “Defense Eagles, Defense” and “Let’s go Eagles, Let’s go” that helped send us into overtime.

As both teams shook hands after the game and as we shouted “Way to Eagles, Way to go,” I thought about the uniformity of the Oklahoma City fans during the NBA playoffs and how our parents rallied together to energize the game. I also thought about how in basketball, both teams start out with the same points, they sweat, make adjustments, pass, shoot, take breaks and get back up to work towards a common goal. Para ganar.

Well we lost by two points but, amazingly, it did not feel like a lost.  I was happy.  Feliz.  Not happy that we lost, but happy with the way our guys worked together to come up from a twenty point deficit, went into overtime and lost by 2 points instead of  50. It was an amazing defeat. Victorioso.